However, in respect of an Indian citizen and a person of Indian origin who visits India during the year, the period of 60 days as mentioned in (2) above shall be substituted with 182 days. The similar concession is provided to the Indian citizen who leaves India in any previous year as a crew member or for the purpose of employment outside India.

The Finance Act, 2020, w.e.f., Assessment Year 2021-22 has amended the above exception to provide that the period of 60 days as mentioned in (2) above shall be substituted with 120 days, if an Indian citizen or a person of Indian origin whose total income, other than income from foreign sources, exceeds Rs. 15 lakhs during the previous year. Income from foreign sources means income which accrues or arises outside India (except income derived from a business controlled in or a profession set up in India).

Note: The Finance Act, 2020 has introduced new section 6(1A) to the Income-tax Act, 1961. The new provision provides that an Indian citizen shall be deemed to be resident in India only if his total income, other than income from foreign sources, exceeds Rs. 15 lakhs during the previous year. For this provision, income from foreign sources means income which accrues or arises outside India (except income derived from a business controlled in or a profession set up in India).

However, such individual shall be deemed to be Indian resident only when he is not liable to tax in any country or jurisdiction by reason of his domicile or residence or any other criteria of similar nature.

Thus, from Assessment Year 2021-22, an Indian Citizen earning total income in excess of Rs. 15 lakhs (other than from foreign sources) shall be deemed to be resident in India if he is not liable to pay tax in any country.

A person shall be deemed to be of Indian origin if he, or either of his parents or any of his grand-parents, was born in undivided India. 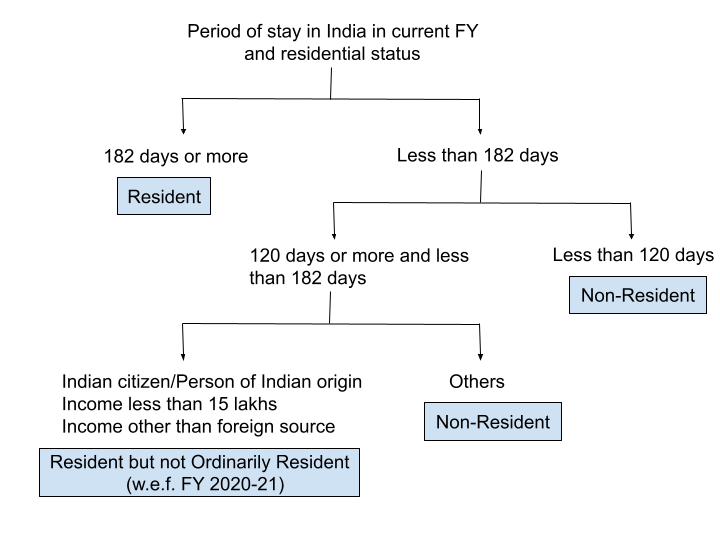 If an individual qualifies as a resident, the next step is to determine if he/she is a Resident ordinarily resident (ROR) or an RNOR. He will be a ROR if he meets both of the following conditions:

1. Has been a resident of India in at least 2 out of 10 years immediately previous years and

2. Has stayed in India for at least 730 days in 7 immediately preceding years

Therefore, if any individual fails to satisfy even one of the above conditions, he would be an RNOR.

An individual satisfying neither of the conditions stated in (a) or (b) above would be an NR for the year.

NR and RNOR: Their tax liability in India is restricted to the income they earn in India. They need not pay any tax in India on their foreign income. Also note that in a case of double taxation of income where the same income is getting taxed in India as well as abroad, one may resort to the Double Taxation Avoidance Agreement (DTAA) that India would have entered into with the other country in order to eliminate the possibility of paying taxes twice.

Registration of Power of Attorney outside India

We use cookies on our website to give you the most relevant experience by remembering your preferences and repeat visits. By clicking “Accept”, you consent to the use of ALL the cookies.
Do not sell my personal information.
Cookie SettingsAccept
Manage consent

This website uses cookies to improve your experience while you navigate through the website. Out of these, the cookies that are categorized as necessary are stored on your browser as they are essential for the working of basic functionalities of the website. We also use third-party cookies that help us analyze and understand how you use this website. These cookies will be stored in your browser only with your consent. You also have the option to opt-out of these cookies. But opting out of some of these cookies may affect your browsing experience.
Necessary Always Enabled
Necessary cookies are absolutely essential for the website to function properly. These cookies ensure basic functionalities and security features of the website, anonymously.
Functional
Functional cookies help to perform certain functionalities like sharing the content of the website on social media platforms, collect feedbacks, and other third-party features.
Performance
Performance cookies are used to understand and analyze the key performance indexes of the website which helps in delivering a better user experience for the visitors.
Analytics
Analytical cookies are used to understand how visitors interact with the website. These cookies help provide information on metrics the number of visitors, bounce rate, traffic source, etc.
Advertisement
Advertisement cookies are used to provide visitors with relevant ads and marketing campaigns. These cookies track visitors across websites and collect information to provide customized ads.
Others
Other uncategorized cookies are those that are being analyzed and have not been classified into a category as yet.
SAVE & ACCEPT

Enter your email before downloading this document